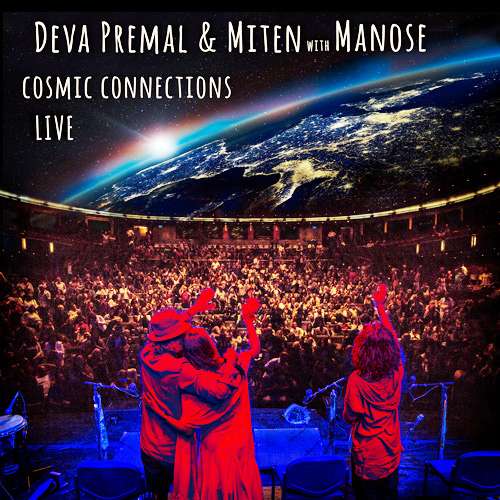 Cosmic Connections Live was recorded during Deva Premal & Miten with Manose’s 2014-2015 world tour, and offers an opportunity to experience the transcendent energy of their live concerts.

The album begins and ends with Deva’s haunting rendition of the timeless and mysterious mantra OM (Deva & Miten call it the ‘Cosmic Yes’) and what lies between is an enchanting journey into mystic realms.

The trio are joined on this inspired collection of mantra and song by a roster of master musicians, notably Joby Baker [bass/percussion/vocals] and Spender Cozens [piano/keyboards], as well as their concert audiences in Budapest, Frankfurt, Edmonton, Bath and Amsterdam.

Deva & Miten see their music as an invitation to take a break from the turbulence of our troubled times and open into a space of inner peace, harmony and meditation. Their new release is another beautiful bridge to cosmic connections.