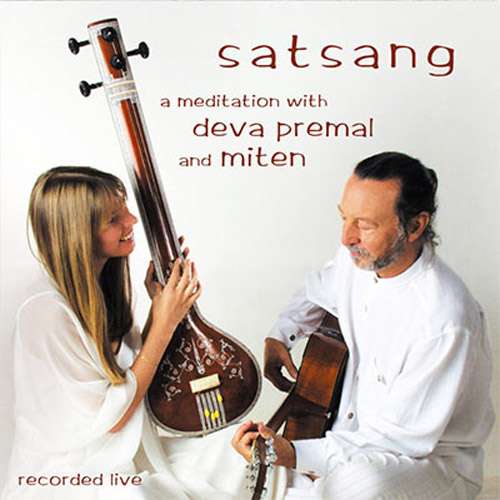 A series of tracks recorded live, this beautiful CD shares the power and simplicity of Deva and Miten's live performances.

A series of tracks recorded live in Australia, America, Germany and Denmark, this beautiful CD shares the power and simplicity of Deva and Miten's live performances.

As it is with Satsang Meditation, Deva and Miten share their music without applause, inviting the listener to participate by joining with the chant, and by sitting with closed eyes for the duration of the meditation.

Satsang features un-plugged versions of some of the most popular chants from The Essence and Love is Space (including The Gayatri Mantra, Chidananda, Yemaya Assessu, etc...), plus the original songs of Miten (Empty Heart, The Strength Of A Rose, etc), and also includes a bonus studio recording of All Is Welcome Here.

The CD is a precious offering to celebrate the sacred space of silence.

"A live recording from concerts by the serene, spirited duo of Miten and Deva Premal. While her beautiful chants are included, his love songs are also heard, and the combining of the two makes for a loving, perfect balance. All is offered in the spirit of meditation, as an hour-long program of song and silence. With Tibetan bells, humming, and extra space between selections, it works surprisingly well for healing, finding that simple space, and as respite from our busy lives."